To recap, in the first two shellcoding posts we Located EIP/RIP and Located the base address of Kernel32. In this post we will discuss the encoding, decoding, and storing Win32 function names. It is necessary to cover this topic before covering how to find Win32 API addresses using Assembly, since the techniques that will be discussed will use these concepts. The encoding we will use is a type of hashing routine that was originally written by @rick2600 and “tweaked” by Peter Van Eeckhoutte @corelanc0d3r. I originally came across this routine while researching shellcode on the Exploit-DB web site.

There are a few reasons that you would want to encode the name of the Win32 API in your shellcode. The top two reasons are:

When an encoded version of the Win32 API name is stored using the method developed by @rick2600 the resulting hash only occupies 4 bytes and cannot be detected by a simple “strings” routine employed by many scanning and analysis tools. Instead of storing “LoadLibraryA” for example we will instead store 0xEC0E4E8E.

The source code that I will be discussing can be found in the PDF I linked to earlier or I have a copy stored in my shellcode-learning repository, located here:

So, what does it do? First, we shall examine the calculate_hash function:

The hash variable is initialized as an unsigned long, which is 4 bytes* (32 bits) in length. To better understand what the first while loop is doing we will focus on the 2nd iteration through the loop. The example library name we will use is LoadLibraryA. The hash variable is initialized with a value of 0 at the beginning of the function. During the first iteration of the while loop the hash variable will equal 0x0000004C. This is because the first character in the chosen Win32 library name is L which has a hexadecimal value of 0x4C. To better understand what the bitwise rotate right (ror) is doing, refer to Figure 1. By displaying the values in binary we are able to see the result of shifting the bits to the right 13 places. The value of the hash variable is 0x02600000 after the ror operation. 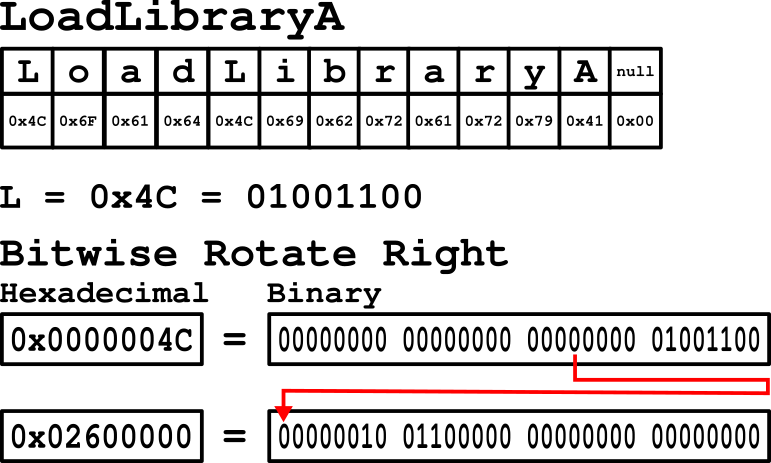 If we follow this pattern to its conclusion, the final value of the hash variable will be 0xEC0E4E8E. As an exercise of your own, see if you can work through the loop using pencil and paper or by modifying the source code of the GenerateHash.c program to see each step of the process in action.

The purpose of the second while loop is to reverse the bytes of the hash to display it in Big-Endian Format. This, actually, is not necessary. As we will see in the next section on storing these hashed values, it is necessary to convert them back to Little-Endian to put into our Assembly (asm) file for storage.

Once the while loop completes aux will equal 0x8E4E0EEC. This value is assigned to the hash variable and returned. Again, on your own try to complete the process using pencil and paper or modify the source code to better understand what is happening if needed.

Once the function names are hashed, they need to be stored to be useful during the execution of our assembly. To do this we will take advantage of the dd instruction in the Nasm assembler. The following assembly code simply stores the hashed value of LoadLibraryA and uses a series of calls to locate it at runtime:

The Assembly code begins by using the same trick to store and retrieve the location of a constant as demonstrated in the previous section. This time, however, the value stored there is the string LoadLibraryA. Next, with the location of the string stored in the ESI register, the compute_hash routine is called. The routine zeros out the EDI and EAX registers and clears the Direction Flag (DF). It then loads the first byte of the string, performs a test see if the end of the string has been reached. If the end of the string has been reached it jumps out of the routine. It then performs the Rotate Right ROR operation, rotating the bits 0x0D (13) places. Then adds the value in EAX to EDI and loops. This code does exactly the same process as what is done in the GenerateHash.c code. EDI should contain 0xEC0E4E8E after the hashing routine completes.

As an exercise on your own, assemble the above code and run it in a debugger to verify that EDI does contain the expected value at the conclusion of the code.

The process of hashing and storing a Win32 API function name does not make for the most exciting shellcode focused blog post but, it is necessary to understand before we move on to finding the addresses of these functions. In this post we covered how to encode the function names using the GenerateHash.c program, how to store data and retrieve it and, finally, how to perform the same hashing process in Assembly. I have not personally tried it but, it should be possible to develop your own variation of these hashing routines to avoid signature based detections meant to look for this specific hashing routine. The only thing you would need to make sure of is that the resulting value from your hashing routine is unique so you avoid finding the wrong Win32 API function address.

In the next blog entry, we will cover the process of locating and storing the Win32 API function addresses so that they can be called later. I hope you found this educational. Thank you for taking the time to read it!